Home
Market
Banks in bonus balancing act as economies shrink but markets boom
Prev Article Next Article
This post was originally published on this sitehttps://i-invdn-com.akamaized.net/news/LYNXNPEC9I0KP_M.jpg 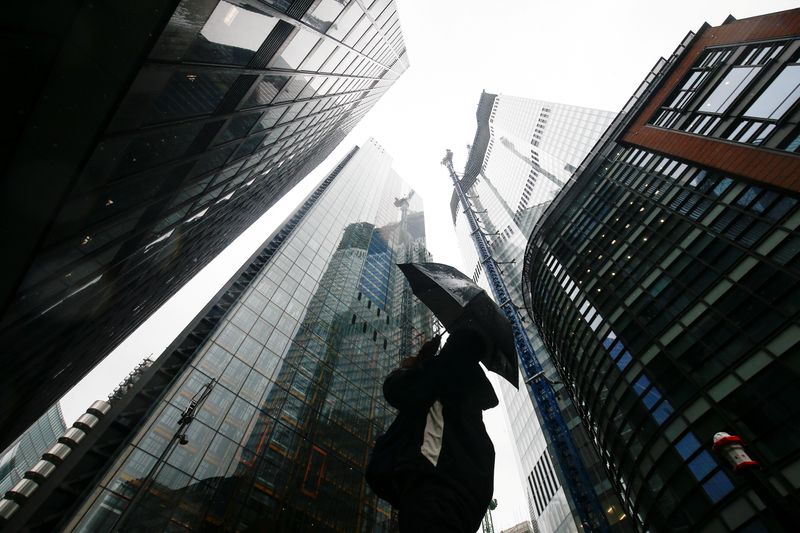 LONDON (Reuters) – Major international banks may still pay out big bonuses to high flyers this year even as the pandemic saps the global economy, as fears of losing talent to rivals during a trading boom trump worries of a big compensation bill.

While the likes of HSBC (L:HSBC) and Deutsche Bank (DE:DBKGn) are making redundancies to trim costs, other banks are taking a more relaxed approach to job, salary and bonus cuts across their workforces, remuneration consultants say.

A poll in June of 75 financial firms by Pearl Meyer, a global remuneration consultant, showed 63% have neither made nor contemplated changes to bonus structures in the face of the pandemic, even though 70% expect COVID-19 to have a moderately or slightly negative impact on their businesses.

Bonus plans also come despite a regulatory frown in Britain and elsewhere on bumper cash payouts in the early days of the pandemic, as banks were urged to conserve capital.

“These banks move broadly in lockstep, no one wants to cut anything first,” said Simon Patterson, managing director at Pearl Meyer, which advises more than 1,000 companies on employee compensation structures annually.

Sources at two global banks said it was too early to speculate on bonus outcomes for specific units, though many traders will expect big payouts after a surge in revenue at market divisions propped up investment bank profits in the first half of the year.

Research from compensation consultant Johnson Associates this month suggested 2020 bonuses for fixed-income traders for instance could rise by more than 30% from last year.

But that will need to be balanced against performances in other units, with low interest rates and an expected rise in defaults set to hit earnings in retail and corporate banking.

“Financial markets are cyclical but what we face is so unprecedented, no one truly knows whether next year is a feast or famine,” Patterson said.

But the PRA has not made clear how long the ban will stay in place and some banks are already planning for future payouts, the Financial Conduct Authority (FCA) noted last month, though it urged them to align payouts with long-term business plans.

The PRA said it will reassess firms’ distribution plans beyond 2020 in the fourth quarter.

Its assessment will be based on the current and projected capital positions of the banks and will take into account the level of economic uncertainty and market conditions at that time.

The European Central Bank said last month that EU-regulated firms must “adopt extreme moderation with regard to variable remuneration payments until 1 January 2021”, though this restriction ends before most EU lenders set bonuses for 2020.

Longer-term, it encouraged banks to consider whether a larger part of variable pay could be deferred for longer or paid in other instruments rather than cash.

A source at a major global bank said firms were reluctant to dismantle bonus structures, because doing so could deter bright graduates from applying for entry-level roles and demotivate existing staff needed to power the business through tough times.

There may however be pressure to adapt their models, in a bid to keep costs in check and avoid a backlash over huge payouts during a recession.

Some are reducing the amount paid to new hires. Data from recruitment consultant Morgan McKinley showed the average salary rise for those moving from one UK finance job to another dropped to 15% in the first half of 2020 compared with 19.8% a year before.

In the United States, some banks including Popular Inc (O:BPOP) and Associated Banc Corp have already said they will pay front-line employees more money in the form of “hazard bonuses” during the pandemic.

Other banks are offering non-financial rewards like extra holiday leave and other benefits to make staff feel both valued and wealthier, at little or no impact to their bottom lines, the remuneration consultants said.

Justine Woolf, director of consulting at UK-based Innecto Reward Consulting, said banks were also looking to increase bonuses to staff who helped them hit certain environmental, social and governance goals, so that payouts were more aligned with good corporate behaviour.

“Banks want to be seen to be doing the right thing,” Woolf said. “That includes increasing diversity and creating a better gender profile, and bonus plans are being tweaked to incentivise managers to achieve this”.

But top risk-takers and executives were less willing to surrender the chance to take home big bonuses, she said, leading some employers to consider awarding restricted stock to appease those who could yet miss out because of regulation.